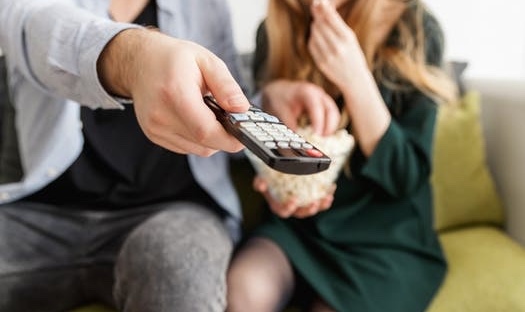 My husband laughed at me last night because I decided I didn’t want to watch Ozark, a TV show on netflix which is just a bit too high pressure for me. A show where twists and turns are around every corner and near misses are part of every episode.

I’ve found myself pulling away from these types of shows recently – I couldn’t face series two of Stranger Things, recently stopped watching ‘Power’ (another adrenaline inducing show). I really can’t handle these shows anymore or don’t want to.

I’m not sure which.

All I know is that I find myself wanting to watch TV shows that are about connection, don’t leave me feeling jittery or amped up.

So I thought I’d share my favourite two with you…they’re not out of the box finds, ones that you’d never have guessed (or some strange Swedish intellectual series) so this is as much an ode to the two shows I love as it is a description of them:

I starting watching Grey’s pretty much from the beginning and it’s been a love affair ever since. I love the characters (my original ‘TV friends’ as I call them to my friends). I love the powerful women – there are so many of them – and I love the storylines, which mirror the social and political themes of the day. Racial violence, domestic abuse, transgender transitions, homosexuality, gun ownership, illegal immigration…they’ve covered it all.

There was particularly powerful episode recently when the Chief, a black female woman, sought treatment for having a heart attack.

The symptoms women have when they’re having a heart attack are often different from men (they’re more likely to experience nausea and vomiting, and pain in the jaw, arm or back), yet it’s the ‘male’ symptoms that are more widely know (pain the the chest, difficulty breathing). Women are also less likely to taken seriously by a doctor – our pain is seen as less severe and we’re less likely to be believed because we’re ‘overreacting’ or ‘being dramatic’ which was reflected in the show and nearly resulted in her death.

I love that, by raising this issue as well as a myriad of other relevant social issues the show has most probably saved lives.

Oh my gosh, this programme is like food for my soul. It’s such a beautiful programme about a family, skipping back and forth through different generations and storylines to explore different themes that the characters are going through.

Dealing with bereavement, struggling with addiction, finding their way through infertility, jostling to find their place in the family, coping with anxiety.

It is beautifully written, more beautifully acted and feels like I’m watching the highlights of an actual family through their lives (albeit a family who don’t really seem to work much and whose dialogue is a bit too flawless!).

I also love how the show feels like it’s an actual reflection of society. There are lots of beautiful, slender people in it, but (and I’ve noticed because I’m sensitive to these things) the cast has an over average number of ‘real’ bodies on it – people with bumps and curves. It surprises me because it’s such an anomaly and makes me hopeful that in the future we’ll see more of society reflected on the screen so that ‘thin’ isn’t the predominant body type on TV.

So there you have it – my two favourite shows. It’s lovely to write about them and think about all the reasons why I love them.

I hope you’ve enjoyed my thoughts too!

One thought on “TV”